Petroleum Development Oman (PDO) had a requirement to remove 14 bends from 20” bypass pipework around block valves on their main oil pipeline while the main oil line remained live and at operating pressure. PDO is the foremost hydrocarbon exploration and production company in the Sultanate of Oman. It accounts for more than 70% of the country’s crude oil production and nearly all of its natural gas supply.

STATS Group were approached by PDO to engineer a solution whereby an isolation tool could be deployed to isolate the branch below the bend to allow the safe removal of 20” bypass pipework on the main oil line. 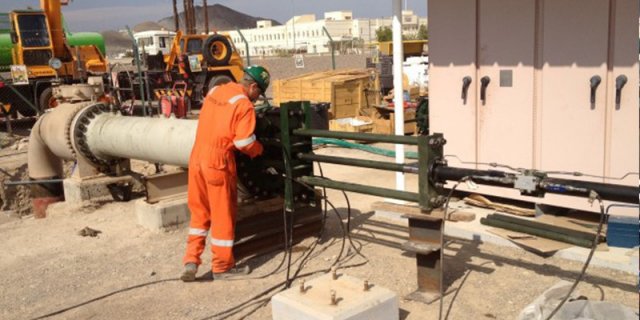 PDO have 1,760 km of main oil pipeline with a total of 31 Block Valve Stations (BVS), 12 of which are on the main oil line from Nahada to Mina Al Fahal. The current layout of the BVS consists of an above ground bypass with three isolation valves. Following routine inspection of the pipeline, internal corrosion issues had been discovered on the bypass pipework included corrosion on the valve flange faces and pitting corrosion on the 90 degree bends.

PDO developed an upgrade strategy to carry out the required maintenance activities in a timely manner and with limited disruption to production. Out of the 12 BVS’s that required maintenance, five were completed during a scheduled shutdown, however seven sites would need the bypass pipework to be isolated to allow upgrade to take place while at an operating pressure of 55 bar (797 psi) and without interrupting production. The planned upgrade work would include reconfiguring the BVS and piping layout so that the bends were completely removed and replaced with a straight vertical section. This allowed the design to be kept simple and prevent integrity issues resulting from stagnant product.

As full bore access to the bypass pipework was available, STATS proposed the use of a tethered Tecno Plug deployed from a temporary launcher by a flexible stem bar. Typically, however 1.5D bends are not designed to be piggable, so the engineering challenge was to design and manufacture a Tecno Plug capable of negotiating 20” 1.5D long radius bends. As STATS Tecno Plugs™ incorporate both seals in a single module, this provides a tool with a compact body allowing the Tecno Plug™ to be deployed around the corroded bend and positioned in the short pipe section. This ensures the bypass section is isolated without interrupting the flow of the main oil line. Additionally, STATS engineered a hydraulic deployment system to deliver the Tecno Plug to the exact isolation location, as positioning of the tool was critical due to the space restrictions. This novel concept ensured an efficient and controlled deployment on each of the 14 occasions, positioning the isolation plug below the section of pipework to be cut and removed.

With the bypass pipework isolated crude oil was displaced behind the Tecno Plug with nitrogen and the pipework was cut below the bend and safely removed. A weld-neck flange was then welded directly behind the Tecno Plug and Non-Destructive Testing (NDT) was performed; this would provide the tie-in point to reconnect a new 20” full bore valve to the system in a vertical arrangement. During the maintenance work the Tecno Plug was constantly monitored. 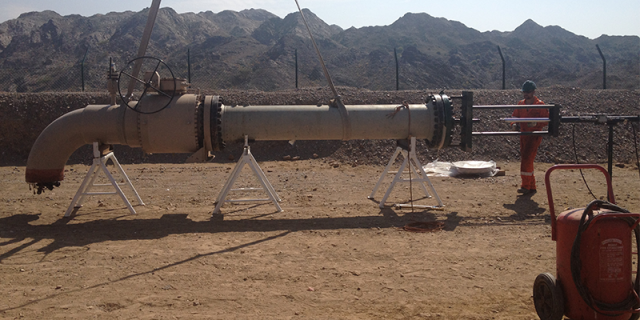 Prior to reconnecting the ball valve, the Tecno Plug control lines and deployment stem bar were reconnected, allowing the Tecno Plug to be recovered into the temporary launcher. Once the ball valve and launcher were rigged into position and bolted, a service test was performed against the rear of the Tecno Plug while isolation was maintained; proving the integrity of the new flanged joints. The Tecno Plug could then be unset and recovered vertically into the launcher for removal to complete the workscope and allow the equipment to be transported to the next location.

In all a campaign of 14 bends across seven sites throughout Oman were removed. Having initially estimated that the entire project would take three months of infield operations, STATS Group staff, contractors and PDO safely completed the project three weeks ahead of schedule. This successful project provided a safe and cost effective double block and bleed isolation, resulting in no interruption to production and preventing a costly shutdown. The safe and efficient workscope was a result of advanced planning, dedication and team work between STATS and client personnel.

STATS Group’s isolation services are increasingly in demand from major operators in the Middle East and Gulf States. This workscope for PDO is now one of many high profile contracts recently completed in the Middle East.