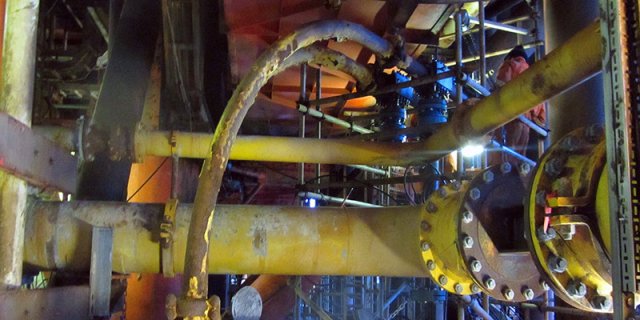 After nearly 30 years of operation in the Northern North Sea, the CNR International operated Murchison field had reached the end of its production life. Prior to the removal of the topsides jacket, it became evident that two subsea flowlines were still connected to the platform. These lines were known to still contain hydrocarbons and required to be de-oiled and cut to enable the heavy lift scope.

When considering the available options to safely disconnect the flowlines, CNRI was progressing towards a conventional Diving Support Vessel subsea intervention that would result in hot tap penetrations being made at subsea to flush the jumper bundles free of remaining hydrocarbons.

STATS Group was initially approached to review the requirement for subsea hot tapping operations. However, following collaborative discussions with Paradigm Flow Services and Halliburton, an alternative solution that would mitigate a diver-intensive operation was proposed that could be completed solely from the platform topsides. This approach provided many safety benefits, reducing the risk to personnel and the environment and providing significant time and cost savings for the operator.

Initial discussions on the scope began in late 2013, and through regular collaborative meetings involving CNRI and all three service companies, each element of the project was explored, developed and risk accessed. In May 2014 CNRI progressed with the platform-based solution and the contract was awarded. At this stage, all individual and collective engineering, manufacture, assembly, testing and offshore execution, was completed within 12 months and in line with CNRI’s schedule.

In order to de-oil and abandon the subsea flowlines, full bore access was required in order to install Paradigm’s Flexi-Coil technology prior to pumping Halliburton’s Thermatek™ fluid system. As there was no suitable valves to offer a positive isolation or provide an access point to gain entry to the flowline, STATS utilised their hot tap installed BISEP™ isolation tool.

Once deployed, the BISEP™ was hydraulically activated setting the dual elastomer seals isolating the flowline. The seal annulus was then monitored and vented, independently testing both seals with full line pressure.

With the flowline successfully isolated and vented from the platform behind the BISEP the line was cut, STATS then installed a mechanical connector and temporary launcher system, providing the full bore access required to deploy Paradigm’s Flexi-Coil technology.

The Flexi-Coil technology is a miniaturised coiled tubing system which is an ultra-lightweight, highly flexible pipe that has the ability to traverse multiple 5D bends in pipeline and riser systems. The Flexi-Coil was initially used to de-oil the flowline but subsequently acted as a conduit to pump Halliburton’s Thermatek™ fluid system through the line.

Halliburton’s Thermatek™ System provides a rigid setting fluid which is ideally suited to plugging and abandonment operations. The low viscosity non-shrinking nature combined with a controlled rapid right angle set and high compressive strength of the fluid, enabled a robust pressure barrier to be installed in the horizontal flowline, allowing the decommissioning of the topsides facility to continue.

The isolation, de-oiling and plugging of the two 3.5” unpiggable flowlines was successfully completed in May, 2015 and allowed the platform decommissioning to progress on schedule delivering the project on time and with no lost time incidents.

Dale Millward, Director of EPRS and Subsea Services for STATS Group, said, “As a result of this collaborative project, the industry now has, where the field layout allows, a practical and cost-effective topsides solution for the isolation and abandonment of live or contaminated subsea flowlines. Unlike traditional techniques, this approach does not require a subsea intervention, eliminating the requirement for costly Diving Support Vessel or Work-class ROV vessels.

“The level of cooperation between all companies demonstrates the value of collaborative working to deliver solutions that would normally be out with any individual company’s capability. This solution has led to significant cost savings for the client in comparison to a conventional subsea intervention.

“A major element of the project success was the positive involvement and enabling influence of CNR International, who showed initiative and willingness to explore new ideas and technologies to increase safety and reduce project timescales”.