STATS Group, has completed a pipeline isolation project at Theddlethorpe gas terminal in Lincolnshire on behalf of Wood Group PSN and Conoco Phillips. STATS technicians deployed its patented BISEP™ isolation technology to allow the replacement of a blow-down valve in an environment of extreme temperature ranges.

The workscope included installing and strength testing a 6” x 6” hot tap clamp, grouting the void between the clamp and pipeline to reduce corrosion issues and installing a full bore 6” 300# ball isolation valve, which was left in-situ post completion.

A hot tap machine was installed and tested to confirm pressure integrity before the hot tap was performed and the BISEP™ deployed to isolate the pipe and allow recovery and replacement of the blow-down valve. 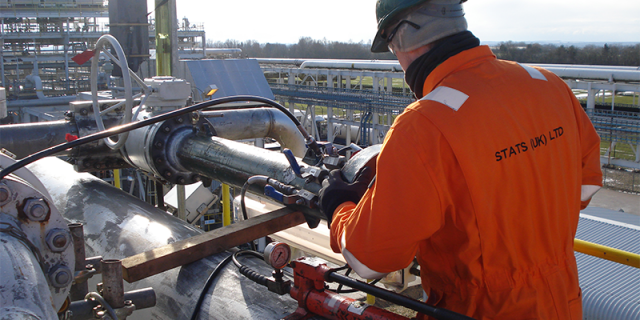 STATS Project Manager Steve Gardiner said: “Our technicians had to overcome grouting and hydro testing problems associated with the low temperatures on site but the project was completed on schedule and within a four week time frame.

“The pipeline temperature made the selection of suitable materials challenging but working alongside our seal suppliers, a material was identified that would perform well in the extreme temperature ranges identified by the client (-29ºC to 32ºC).

“Our BISEP™ tools allow dual seal isolation of a pipeline through a single entry point and an increasing number of clients are discovering the benefits of this unique isolation technology.”