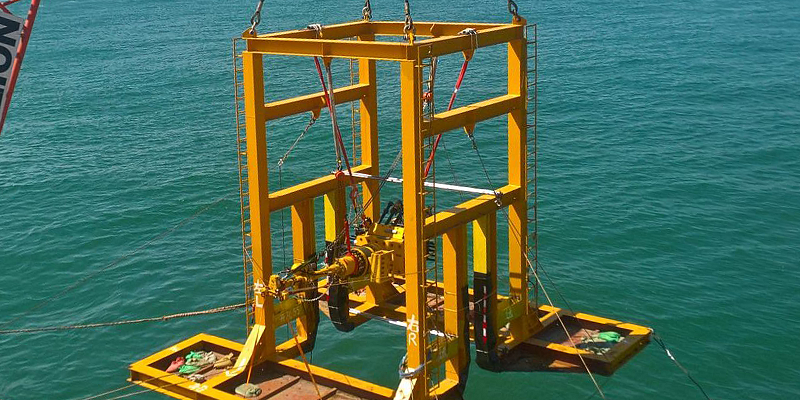 STATS supplied the subsea hot tapping and plugging equipment to provide a DNV-GL type approved double block and bleed isolation whilst the pipeline section was cut, removed and replaced. The BISEP dual activated compression seals are proven to be leak-tight prior to the Isolation Certificate being issued, therefore there is no requirement for active venting of inventory, typically required if conventional line stop equipment were used.

Although in a relatively shallow water environment of 30 meters depth, the subsea conditions for the work scope were challenging as the visibility was extremely limited, and a strong current limited the dive slots to four per day which only lasted between 1 and 2 hours each time. With such challenging conditions, it was critical that the dive team were competent operating STATS hot tapping and plugging equipment.

To mitigate project risk, a system integration test (SIT) was completed in China, which replicated the subsea operations and trained the dive teams on the use of STATS equipment. The SIT commenced with a topside dry test, with all equipment set up and STATS technicians provided training for the dive team to successfully operate the equipment. Offshore conditions were deemed so challenging that the divers practised and rehearsed key operations blind folded.

Upon completion of the dry SIT scope, the test scope was repeated with a wet trial whereby the deployment frame complete with equipment was over-boarded from the quayside to the seabed to replicate similar visibility conditions to that offshore. The SIT scope included subsea hot tapping operations and BISEP deployment and activation. On completion of the STATS equipment training modules, and diver confidence from repeated operations – the project moved onto the next phase. The equipment was then mobilised straight from the quayside to the barge ready for offshore operations.

Once the pipeline dredging and concrete removal was completed, the first of two deployment structures were installed to the pipe complete with a Hot Tap Mechanical tee, Slab Valve and Hot Tap Machine.

Once subsea, the structure was placed over the pipeline and lowered into position using lead-in points on the structure for fine alignment. The divers were then deployed to lower the clamp over the pipeline, make up the body flanges, rotate the clamp into the final vertical position, then tension the side collet flanges to seal the clamp to the pipeline. The full equipment stack-up was then pressure tested to ensure a leak-tight connection prior to hot tapping into the live pipeline.

Upon completion of the equipment stack-up pressure testing, the Hot Tap Machine (HTM) with cutter was advanced through the Slab Valve to drill the hole in the pipeline at 54 bar pressure under full pipeline flow conditions. Once the HTM had drilled to depth, the coupon from the pipeline was retained within the HTM and recovered to the topside. A dimensional inspection was conducted and recorded by STATS technicians to ensure an even and smooth cut. Prior to removal of the HTM, the STATS double block and bleed Slab Valve was closed by the divers and seals tested via an umbilical to the topside to ensure a leak-tight barrier.

The same process was then repeated in the downstream position allowing the entry point on the pipeline for second subsea BISEP.

Following completion of the Hot Tapping operations and safe removal of the HTM, the subsea BISEP was deployed and carefully installed to the STATS Slab Valve and flange connection tensioned by the divers. The flange connection of the BISEP and Slab Valve was then tested again to ensure pressure integrity prior to re-opening the Slab Valve. The first BISEP was then deployed into the pipeline in the upstream location and hydraulically activated energising the seals and creating the first isolation barrier. As there was a risk the worksite may have to be abandoned due to extreme weather conditions, STATS incorporated a subsea hydraulic accumulator into each BISEP control system, ensuring the isolations would remain securely locked in by the hydraulic actuation system, even if the self-locking differential pressure across the isolation was lost due to pipeline pressure fluctuations.

The vessel then moved to the downstream position and activated the second BISEP deploying it into the pipeline. The 250 meter of isolated pipeline section was then vented from 54 bar pipeline pressure to subsea ambient of 3 bar through the BISEP launcher. 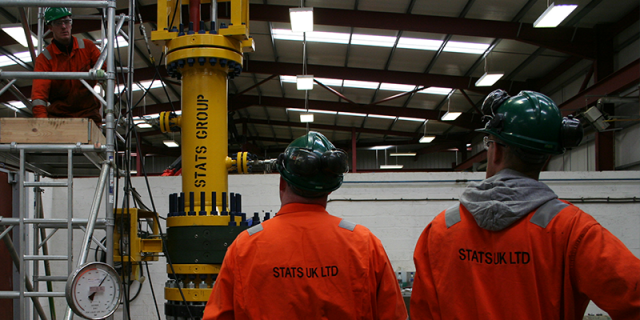 Each BISEP was then subject to a test regime to independently test both the primary and secondary seals and verify a zero-energy zone in the seal annulus. Once the test regime was complete, an Isolation Certificate was issued to notify all parties of the safe isolation of the pipe section. Utilising the 2” offtakes present on the BISEP launcher, a downline from the vessel was connected to both the upstream and downstream position to ensure the pipeline medium was removed from the pipeline and the isolated pipeline section of 250 meters was flushed with sea water prior to commencing the pipe cutting.

Diamond wire cutters are deployed to the seabed from the vessel and the damaged pipe was cut in multiple locations and lifted from the seabed to a barge. After the concrete had been removed from the pipe ends, subsea connectors were installed to the bare pipe providing a connection between the pipe and the new flexible pipe section.

Utilising the 2” offtake on the Subsea BISEPs, the new flexible pipe section was subject to a hydrostatic pressure test against the rear of the set BISEPs at 80 bar. Nitrogen was then pumped from the barge to purge the seawater from the newly installed flexible pipe and equalise the pressure to 54 bar. Each BISEP was then unset and recovered into the launcher and Slab Valve closed to act as a barrier to pipeline pressure. At this point, the pipeline resumed production through the new flexible pipe section.

Following Slab Valve integrity testing, the Slab Valve was opened and the completion plug advanced from the HTM into the hot tap fitting flange. The plug was then mechanically set by the divers in the pre-determined location and the divers locked the Completion Plug into place. The pressure was then vented above the Completion Plug and monitored to ensure pressure integrity. Once complete, the Slab Valve was removed and a blind flange installed to the hot tap fitting flange to act as an additional barrier.