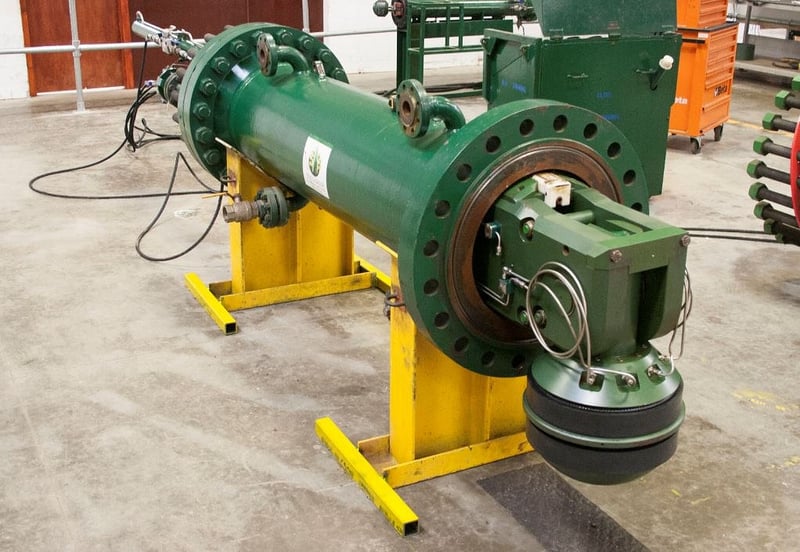 A solar power station in Abu Dhabi, one of the largest of its kind in the world, was the latest location for the deployment of STATS hot tap installed pipeline plugging technology. STATS deployed their patented BISEP® isolation tool into a 16” production line containing heat transfer fluid, during a planned shutdown of the power station. The production line is connected to five large storage tanks and was required to be isolated to allow four valves to be introduced into the system.

The solar power station uses parabolic trough technology to generate electricity and covers an area of approximately 2.5 square kilometers which makes it one of the largest of its kind in the world. The solar field contains many parallel rows of parabola-shaped reflectors which focus the suns rays at 30 to 100 times its normal intensity. Heat transfer fluid inside the reflectors carries the heat to a steam generator, where water is converted into superheated steam. This steam runs a turbine, which puts an electric generator in motion, just as in a conventional fossil-fuel power plant.

During the shutdown the heat transfer fluid cooled to 80°C from an operating temperature of 390°C. In order to ensure the elastomer seals of the BISEP would perform as intended at the high temperature, STATS conducted a Factory Acceptance Test (FAT) at their operational base in Abu Dhabi. The FAT was conducted in a purpose-built test fixture to replicate the pipe specification and temperatures expected on site. The BISEP was deployed and hydraulically set in the test fixture containing heat transfer fluid which was maintained at a constant temperature of 90°C for five days. With the successful completion of the FAT the equipment was mobilised to the worksite.

Onsite a mechanical hot tap fitting and gate valve was installed onto the pipeline at the isolation location and leak tested. Hot tapping of the pipework was then conducted with STATS SureTap hot tapping machine and the pipe coupon was recovered, providing access for the BISEP. With the hot tapping completed, the BISEP in a pressure competent launcher was attached to the closed gate valve and leak tested. The pressure in the BISEP launcher was then equalised and the gate valve was opened allowing the BISEP to be hydraulically deployed into the pipeline. The dual elastomer seals of the BISEP were hydraulically set providing fail-safe double block and bleed isolation, without the need for additional hot tapped bleed or vent ports. The BISEP was then subject to a test regime to independently test both the primary and secondary seals with full pipeline pressure, the cavity between the seals (annulus) was vented to ambient through the BISEP and verified as a zero-energy zone. The vented annulus void was then closed and monitored confirming leak-tight isolation. Following successful seal proving, an Isolation Certificate was issued to notify all parties of the safe isolation of the pipeline. The BISEP then remained in the pipeline for five days while all four valves were installed into the pipeline, during this time the BISEP seal annulus was monitored and remained leak-tight.

Ajith Pushparajan, Project Engineer for STATS Group, said: “This project is the first time STATS have utilised their hot tapping and plugging technology in the renewables sector, this highlights the benefits of the BISEP isolation technology to meet client challenges out with the oil and gas industry. Due to space constraints at the isolation location, the BISEP was the only solution available in the market to meet the clients double block and bleed isolation criteria, as it is deployed through a single hot tapped intervention”.