The successful deployment of STATS Group’s BISEP isolation technology prevented the costly shutdown of a Malaysian pipeline and allowed it to maintain uninterrupted gas production at full operating pressure of 78 barg. STATS Group was approached by PETRONAS Carigali to provide double block and bleed isolation services to allow replacement of two welded flange valves at the Onshore Slug-Catcher (OSC) at Terengganu. The OSC forms part of the Angsi field which is situated off the east coast of Peninsular Malaysia in the South China Sea. Dehydrated compressed gas from the Angsi complex is transported 166km via the 32” pipeline to the OSC in Kertih, Terengganu.

To allow gas production to be maintained, STATS was required to provide two simultaneous isolations to ensure the receiver, valves and 18” kicker line, were fully isolated to facilitate the valve replacement workscope without interrupting production flow. STATS positioned a 32” Tecno Plug which was pushed to the set location with a hydraulic extension and tether control system. 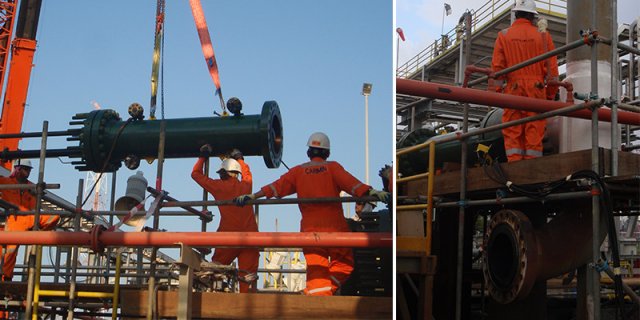 This purpose-built deployment system was installed into the receiver and then hydraulically activated once inside the closed receiver. The Tecno Plug was then pushed to the isolation location and positioned with millimetre accuracy in a short section of pipe spool inboard of the production tee. The Tecno Plug was then set and each seal was independently tested with full pipeline pressure in the correct direction to verify leak-tight isolation.

A split-tee fitting was then welded to the 18” kicker-line to provide an access point to deploy STATS patented BISEP isolation tool. A slab valve was then attached to the fitting and pressure tested to confirm integrity. Once completed a hot tap machine was attached to the slab valve and deployed to cut the pipeline and recover the pipe coupon. The hot tap machine was recovered and removed from the closed slab valve. The BISEP was then deployed into the pressurised pipeline and hydraulically set to energise the seals and isolate the kicker-line.

With both the Tecno Plug and BISEP set in the pipeline the launcher and kicker-line was depressurised, providing safe worksite conditions to enable the efficient replacement of two 18” kicker valves and two 32” motor-operated valves with no interruption to production.

Prior to deployment to the worksite a Factory Acceptance Test (FAT) was performed in a purpose-built test fixture to replicate the client’s pipeline, including system configuration and pipe schedule. All testing was witnessed by an independent verification body.

STATS’ isolation services are increasingly in demand from major operators in Malaysia and the workscope for PETRONAS Carigali is one of many high profile contracts completed in the Far East.