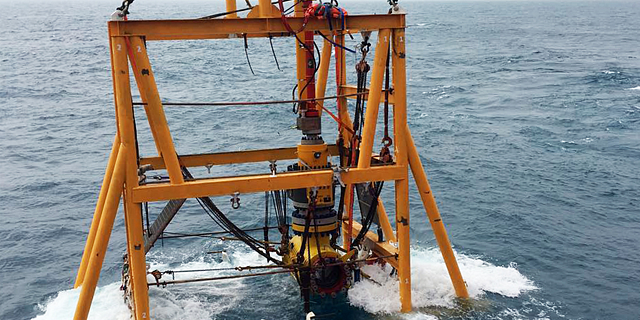 STATS Group were contracted by COOEC Subsea Technology Co Ltd to provide temporary subsea isolation of the Yacheng pipeline, situated in the South China Sea. The 780 kilometre 28” subsea gas export pipeline supplies gas to Hong Kong and had become damaged by an anchor at a location approximately 280 kilometres from Hong Kong, at a water depth of 90 metres.

An anchor had been dragged and damaged one of two subsea pipeline end manifolds (PLEM) and made a severe dent in the pipeline leaving the pipeline unpiggable. When COOEC knew of the damage, a temporary repair was implemented, installing a 400 metre, 14” bypass between the PLEMs. This enabled the pipeline to continue operating at 70 bar while the permanent repair method was agreed and prepared.

After several detailed engineering studies and comprehensive risk assessments, the client concluded that the permanent repair would be completed by recovering the subsea pipeline from the seabed onto a pipelay vessel, while the pipeline remained pressurised at a shut-in pressure of 57 bar. The permanent repair work included the removal of the severely dented pipeline and both existing PLEMs, including the 400 metres of pipeline between them.

Since this pipeline is of crucial importance for the supply of gas to Hong Kong, the shutdown period for the repair work needed to be kept to a minimum. Therefore, the repair had to be done without depressurising and flooding the entire pipeline.

To ensure safe recovery of both ends of the pipeline onto the pipelay vessel without depressurising or allowing water ingress into the pipeline, STATS Tecno Plug™ and BISEP™ isolation tools were installed. This enabled only the sections of pipeline that were being recovered from the seabed to be isolated. To ensure diver and worksite safety, the isolation tools had to provide fully proved, fail-safe, double block and bleed isolation barriers from the pressurised pipelines, complying with industry guidance on isolation and intervention for diver access to subsea systems.

Due to the unpiggable defect on the pipeline it was not possible to pig isolation plugs through the pipeline from the permanent pig launcher. Therefore, STATS proposed deploying their dual seal BISEP™ isolation plug which is installed at location through a hot tap clamp fitting. Deployed into the pressurised pipeline downstream of the damaged pipeline, the BISEP™ provided a fully proved double block and bleed isolation barrier against the pipeline gas pressure. This allowed the pipeline to be depressurised between the rear of the BISEP™ and the PLEM enabling the damaged section of pipeline to then be safely cut and removed.

With access to the pipeline gained, STATS dual seal flangeless plug launcher was attached to the bare pipe end allowing two remotely operated Tecno Plugs™ to be pigged into the pipeline. 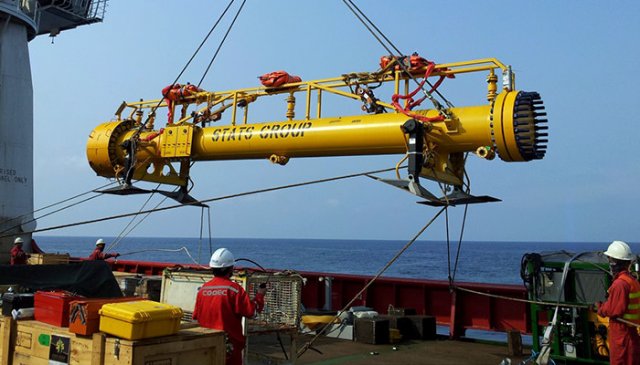 A pipeline retrieval tool was then used to recover the pipeline to the pipelay vessel allowing new pipeline sections to be welded to the existing pipeline before laying them back onto the seabed via a flanged laydown head.

The four Tecno Plugs™ in the pipeline were remotely monitored continuously from a diver support vessel while the pipeline was being isolated. To prevent seawater flooding into the newly laid pipeline sections when connecting the pipeline to the new PLEMs, the rear Tecno Plugs™ were repositioned by equalising the pressure, unsetting them and pigging them back to the newly attached laydown heads. The plugs were then reset and their double block isolations were proved again so that the laydown heads could be safely removed by the divers. 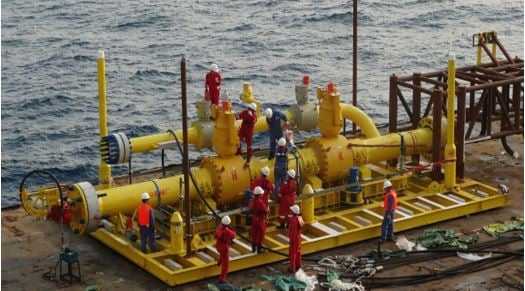 The repair was completed by connecting the two PLEMs together with a final 25 metre tie-in spool which was then leak tested and dewatered. The subsea pipeline isolation valves were then opened and the critical gas supply to Hong Kong was restored.

The strategic use of the BISEP™ and Tecno Plug™ isolation tools ensured that the primary project objectives were successfully achieved. The pipeline was repaired as safely and quickly as possible, without depressurising or flooding the entire pipeline and while ensuring that any seawater that may have entered the system was removed before the pipeline resumed operation.