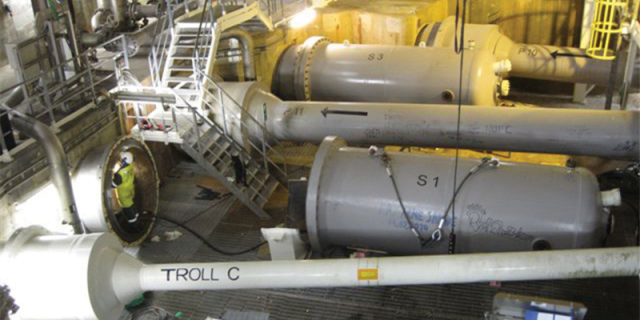 STATS Group successfully executed a 36” pipeline tie-in for Statoil’s Troll Alpha Platform in 2011 which marked the completion of an 18 month design, manufacturing and installation project. STATS Group, which has a frame agreement with Statoil, outlines here the challenges involved in what at the time was one of the company’s most complex projects to date.

Statoil’s Troll A platform, located off the west coast of Norway, has an overall height of 472 metres, weighs 683,600 tons (1.2 million tons with ballast) and has the distinction of being the tallest structure ever moved over the surface of the earth by mankind.

The Troll A platform utilises a system of seal tubes to tie-in risers which are run down the inside of a dry concrete leg. The seal tubes were concreted in place at the base of the riser leg on the gravity base structure in 1991. There are seven seal tubes – four designed for large bore pipe up to 36”, and three designed for smaller diameter pipe, up to 20”.

When the platform was commissioned in 1995, three pipelines were pulled-in through the seal tube system – two 36” pipes for the export to Kollsnes and one 20” for an import line. In 1997, a fourth pipeline was tied-in. This time the line was a 16” which utilised the second smaller seal tube, however the seal cartridge was revised to utilise a compression seal rather than the inflatable seal used in the first three operations.

Statoil approached STATS to perform an engineering study to identify the procedures and apparatus required to perform another pipeline tie-in utilising one of the remaining unused seal tubes. The pipeline is a new 62.5 km, 36” pipeline (P12) which is to be installed between Troll A and Kollsnes in Norway.

STATS primary role was to design, manufacture and install the bespoke engineering interfaces on Troll A to allow the new pipeline to be pulled-in through the existing seal tube arrangement in the gravity base structure 300 meters below sea level, whilst still providing full isolation between the inside of the platform leg (at ambient) and the seawater pressure outside (30 Barg).

The project was challenging as many of the original interfaces no longer complied with 2011 standards and risk assessments. STATS had to apply their specialist engineering expertise in pipeline isolations to develop new tools that would provide safe isolations for the pull-in. The biggest challenges were to provide a minimum of two independent isolations during all of the phases of the pull-in, whilst also being able to monitor the pressures between these isolations at all time, to provide a safe working environment within the concrete leg 300m below sea level.

Additionally the isolation tools had to interface with 20 year old equipment which was relatively inaccessible. STATS had to rely on ‘as built’ archive data from the original construction of the seal tubes and ROV survey data for some of the interfaces involved.

In January 2010, STATS mobilised equipment and personnel to the Troll A platform to undertake a site survey of the seal tube identified as S1. The survey performed was carried out on both the external and internal condition of the seal tube and associated pipework and valves. The TSU (an early version of STATS’ current Tecno Plug™) hydraulic circuits where function tested to confirm expected fluid returns during setting and un-setting operations, additionally the seals were tested to confirm their condition. The TSU had been stored inside the seal tube for the past 16 years in one atmosphere of nitrogen. STATS where able to confirm the TSU was fully operational, while NDT testing on the associated pipework of the seal tube was also performed to confirm wall thickness prior to conducting pressure testing on the system to reduce any risks.

STATS designed a 36” Temporary Anchor as the mechanism by which any axial forces generated by the 36” pipeline was transmitted into the seal-tube and in turn into the gravity base structure. This system stops the differential loading from the water pressure acting on the pipeline forcing the pull head into the platform which in turn could damage the seal tube. The hydraulic cylinders contained sufficient stroke to ensure maximum eccentricity conditions between pipe and Temporary Anchor was accommodated. Twin hydraulic circuits were utilised and as the Temporary Anchor is capable of restraining the maximum pipeline load of 350 tonnes on one hydraulic circuit, the system provided a built in 100% back-up. The lock contact load created by the cylinder pressure is translated into a significant radial load. This load is transmitted into the pipe outer wall via a toothed profile lock contact surface. This set condition creates the internal locking mechanism. Inward movement of the pipeline when the locks are set further enhances the grip on the pipeline due the self-energising design of the temporary anchor. 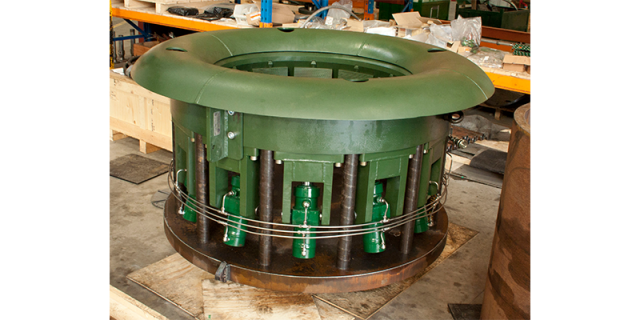 The 36” Seal Cartridge is a unique and bespoke interface which provided the seal between the P12 pipeline and the seal tube outer casing. The Seal Cartridge contains two 1.2m diameter compression seals, each weighing in excess of 80kg. The elastomer seals provided a pressure testable barrier system to prevent seawater under pressure from entering the internal end-cap. It also provided an additional sealing function to prevent grout ingress into the internal end cap during the grouting operations. Again, as with the Temporary Anchor, the Seal Cartridge utilised twin hydraulic circuits capable of setting the seals independently, thus the system provides a built in 100% back-up.

The considerable radial forces generated by the Seal Cartridge elastomers have the added benefit of assisting the pipeline to centralise within the seal tube without causing damage to the pipeline.

The Seal Cartridge also provides two of 1” contingency grouting lines designed to be utilised in the event of an unplanned shutdown resulting in the existing platform grout system becoming blocked and unusable. 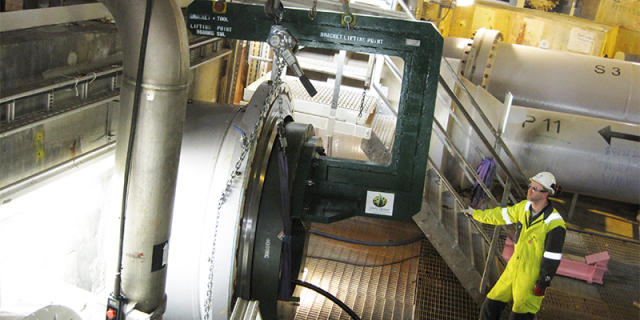 The Grout Bung is a bespoke subsea installed isolation tool, designed and manufactured by STATS to provide an external seal between the 36” P12 pipeline and the 50” Troll A seal tube outer casing.

The grout bung utilises a two part specialist seal, integrated into a large hydraulic clamp assembly with integral locks, which can be remotely closed around the pipeline then manoeuvred into its set location via an arrangement of adjustable hydraulic circuits.

The whole assembly is remotely controlled via hydraulic control panels mounted on the deployment frame. The Grout Bung installation is controlled by ROV and supervised by STATS technicians. Once installed, the void between the Seal Cartridge and Grout Bung can be grouted, providing corrosion resistance, support and stability, to the new pipeline prior to installing the internal riser components.

The Grout Bung, like the Seal Cartridge, also provided additional contingency grouting lines designed to be utilised in the event of further unplanned shutdowns if the Seal Cartridge grouting system became unusable. The picture below shows the complete Grout Bung, including the spreader bar used to stabilise the assembly during deployment and recovery offshore. 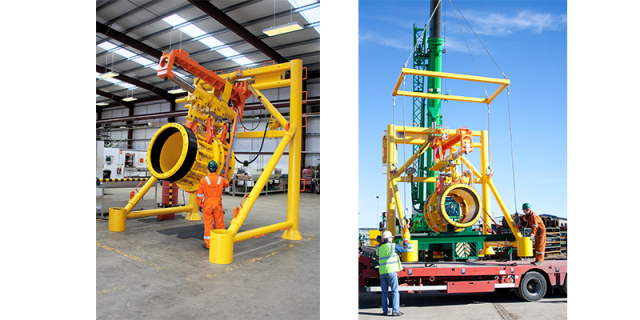 During the project STATS were approached by Allseas, who were responsible for the pipe lay campaign, to design and manufacture the pipeline Pull Head. STATS utilised an existing model from Allseas and modified it to interface with the de-watering isolation tool supplied by STATS.

A unique interface panel integrated in the Pull Head design, allowed the STATS technicians to communicate with the isolation tool in the event of a pipeline wet buckle. The isolation tool could then be used to dewater the repaired pipeline, saving weeks of downtime.

Over 10 additional bespoke interface tools were also designed and manufactured by STATS to assist in the pull-in of the new 36” pipeline. These included equipment for removing the external seal tube door and communicating with pre-installed equipment more than 16 years of age that were inaccessible by technicians during the project.

All stages were successfully completed to schedule by STATS and the 18 month project concluded in August 2011 with the removal of the pull head plug which was set inside the new pipeline to provide an isolation barrier during the final riser tie-in. Additionally, the pull head plug had the capability of being utilised as a dewatering plug in the event of a pipeline wet buckle during the pipe lay operation.

The safety of people, assets, and the environment is the main focus on all STATS Group projects and our safety record on the P12 project is testimony to those objectives. During the P12 project the man hours worked on the project were as follows:

GET OUR COMPARISON OF DOUBLE BLOCK AND BLEED TECHNOLOGIES TECHNICAL PAPERS