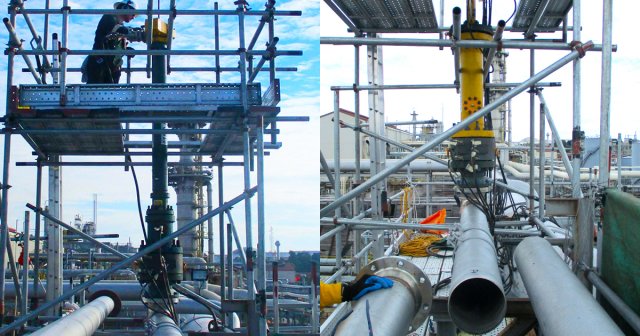 STATS Group were recently retained by a major operator in Malaysia to provide hot tapping and isolation of a pressurised 8” pipeline at an onshore gas plant.

STATS proposed the use of their patented BISEP® to provide a double block and bleed isolation of the stainless-steel flare line. The leak-tight isolation enabled a 15 meter section of damaged, thin wall piping to be safely cut, removed and replaced with a new section which was welded into the system.

The BISEP was deployed into the pipeline through a split tee fitting, welded to the line at the isolation location. Once the fitting was pressure tested, a STATS supply slab valve and hot tap machine was attached to the fitting. The hot tapping operation was conducted, recovering the cut pipe coupon into the hot tap machine and closing the slab valve.

The BISEP, which is housed in a pressure competent launcher was fitted to the slab valve and leak tested, confirming the integrity of the BISEP launcher. The slab valve was then opened and the BISEP was deployed into the pipe towards the pressure to be isolated.

The BISEP isolation is provided by a spherical plugging head which incorporates dual compression seals. The elastomeric seals are activated by a hydraulic cylinder inside the plugging head, which compresses the seals. The resultant radial expansion pushes the seals out against the pipe bore creating a leak-tight isolation.

The BISEP was then subject to a seal test regime to independently test both the primary and secondary seals with full pipeline pressure, the cavity between the seals (annulus) was vented to ambient through the BISEP and verified as a zero-energy zone. The vented annulus void was then closed and monitored throughout the workscope confirming leak-tight double block and bleed isolation. Following successful seal testing, an Isolation Certificate was issued to notify all parties of the safe isolation of the pipeline.

The BISEP then remained in the pipeline for 26 hours while the pipeline was cut, removed, and new pipework was welded into place behind the BISEP. During this time the BISEP seal annulus was monitored and remained leak-tight.

After a successful reinstatement test of the new pipework, pipeline pressure was equalised and the BISEP was unset and recovered into its launcher. The slab valve was closed allowing the BISEP launcher to be depressurised and removed. The hot tap machine was then reinstalled to allow a completion plug to be deployed and set into the flange of the welded split tee fitting. With the completion plug set and tested the hot tap machine and slab valve were removed from the pipeline and a blind flange was installed onto the fitting.

The workscope was completed safely, without incident and ahead of the planned schedule. STATS supplied personnel and equipment which included, a split tee fitting, hot tap machine, slab valve, BISEP and completion plug. All hot tapping and isolation services were carried out by STATS technicians.

“By using the BISEP operators can make significant savings by performing maintenance or repair work without the need for a shutdown. The single-entry point of the BISEP reduces costs and operational timescales by providing a verified double block and bleed isolation through a single intervention point, without the need for additional hot tapped bleed ports.”