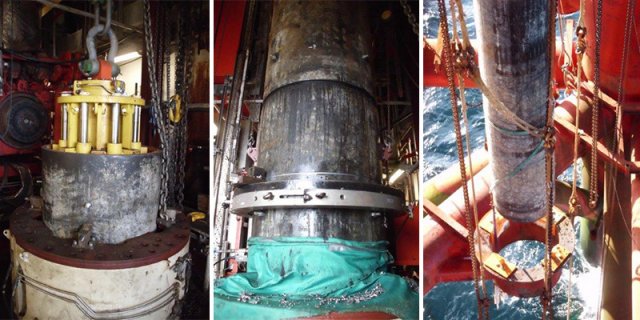 As assets remain in service beyond their planned operational lifespan, caissons will inevitably experience severe external and internal corrosion due to their harsh environment. This can result in loss of structural integrity due to fatigue cracking resulting in all, or part, of the caisson becoming detached.

Falling caissons have the potential to impact vulnerable assets on the way down or on the seabed. Should a caisson become detached this would pose a serious safety concern for a platform and risk damage to subsea pipelines and equipment, impacting on production and reputation.

As demand to remove and replace caissons has grown, STATS have carried out an increasing number of operations, providing internal and external lifting tools to safely and efficiently secure and recover damaged or redundant caissons. STATS mechanical lifting tools allow the controlled and planned removal of caissons without the need to shut down production.

Internal and External Lifting Tools (ILT / ELT) can be installed in advance of the removal activities to safely hold unsecure caissons in position, until a planned retrieval on to the platform can be performed using the same tool. The compact size of the ELT and modular design of the ILT allows caissons to be recovered where space is limited. The caissons are then securely lifted and cut into manageable sections before being safely removed from the platform.

Where caissons have internal obstructions due to pump strings or liners, STATS can provide ELT’s which are mounted to the outside of the caisson. The split section design allows each half to be easily installed, particularly in areas where access or height is limited. Once installed to the caisson, external gripping locks are hydraulically activated applying vertical load which grips against the wall of the caisson. The ELT’s feature an array of hydraulic cylinders which are piped with two independently actuated hydraulic circuits. This arrangement has been engineered to allow four of the locks to be actuated via one hydraulic circuit and the remaining four locks to be actuated via the second hydraulic circuit. If the integrity of a hydraulic circuit was lost this contingency system would ensure 50% of the locks remained in their fully set condition with full communication. The tools are designed and tested to prove 50% lock engagement is sufficient for the tool to take its design load of 55 Tonne. The taper-lock design provides a fail-safe locking system independent of hydraulic pressure, once pre-tension is applied to the lifting tool the hydraulic actuation circuit becomes redundant.

Internal Lifting Tools (ILT) feature a twin module design, with each module containing its own set of independently controlled locks allowing operation in caissons with varying wall thicknesses. The taper-lock design provides a fail-safe locking system independent of hydraulic pressure, both locks provide axial and lateral stabilisation within the caisson. The modular design of the ILT allows the length between lock modules to be customised simply by adding additional linking rods to meet the caisson requirements. The modular design of the tool and deployment method also allows for easy installation particularly in areas of restricted access.

When ILT’s are unset they offer generous clearance inside the caisson, this allows the tool to pass through bore restrictions or swaged liners as it is deployed to the desired location. This allows the ILT to bridge damaged or weak sections of caissons, securely holding them in position before and during the recovery operation.

The ILT linking rods can also be fitted with pigging discs or hydraulically activated panels to provide additional stabilisation and centralisation where a damaged caisson has the potential to separate during the recovery process. The centralisers will ensure the caisson remains aligned allowing it to pass through the guide supports.

STATS mechanical lifting tools have been used regularly in the North Sea, UK to facilitate the removal of caissons on behalf of operators and engineering contractors.

An ILT and two ELTs were utilised to secure and recover two 42”, 90 metre caissons, both caissons were badly damaged and had previously been repaired with swaged liners. The previously installed liners now presented a bore restriction, however due to the damage and risk of the caisson from separating during the recovery, STATS utilised an ILT to pass through the liners and bridge the weak sections of caisson. This approach ensured the integrity of the caissons were maintained while two ELTs were used simultaneously, to secure and lift the caisson in stages, allowing sections of caisson to be cut and removed until all the caisson was recovered. The same method was then carried out to remove the second caisson.

STATS were approached by an engineering contractor to recover and replace a 20 metre, 24” fire water pump caisson. The operator wanted the caisson replaced before the winter season as they were concerned the harsh winter weather and rough seas would further damage the caisson causing it to become detached from the platform. Despite the short lead time STATS provided an ILT, engineered to the client’s specification and including a full factory acceptance test prior to deployment. Once on the platform, the ILT was installed to straddle the damaged section, securing the caisson during the recovery on to the platform.

Following many internal and external repairs to a 41” caisson in the North Sea, STATS were required to provide lifting tools to remove and replace a caisson which had been in operation for over 20 years. A combination of internal and external tools was used due to the risk of the caisson severing and falling into the sea during the recovery. STATS also supplied clamshell cutting machines which were used to cut the caisson into manageable sections during removal. External lifting tools we also used during the reinstatement of the new caisson, allowing sections of caissons to be mechanically attached and lowered safely and efficiently in a controlled manner into location.

To provide technical assurance, all lifting and securing tools undergo a client or third party witnessed factory acceptance test (FAT). The purpose of the FAT is to prove the functionality, serviceability, integrity and safe working load (SWL) of each ILT and ELT prior to mobilisation. In addition, all STATS mechanical lifting tools are design in accordance with the DNV Standard for Certification of Lifting Appliances.