10” BISEP with 8” bypass port during installation

STATS Group were contracted by Bilfinger Deutsche Babcock on behalf of the Abu Dhabi Oil Refining Company, Takreer, to provide hot tapping and plugging services to allow the replacement of a 500 meter section of a 10” jet fuel pipeline while it remained in production and at an operating pressure of 21 bar. Takreer had identified defects in a section of pipeline which transports jet fuel from Mussafah to Abu Dhabi International Airport. The project included an additional challenge as the defective pipe section spanned a gas pipeline corridor, therefore no work was permitted to take place within the exclusion zone.

A redundant 10” pipeline which runs parallel to the jet fuel line was identified as a suitable replacement and a proposal was developed that would allow the existing jet fuel line to be re-routed at either side of the gas corridor and tied into the redundant pipeline. This method would prevent the operator from needing to lay a new pipeline through the excluded area.

The workscope began by first excavating both pipelines at either side of the gas corridor and preparing the 500 meter section of redundant pipeline to be used as the replacement section. A cold cutting machine was used to remove short sections of pipe spools and gain access to the redundant pipeline. STATS then provided a temporary pig launcher and receiver and attached one to either side of the bare pipe-end of redundant pipe with mechanical connectors. A pre-installed gauging pig in the launcher was then pigged with water through the redundant pipeline to the pig receiver on the opposite side of the gas corridor. The water filled pipeline was then hydro-tested to confirm its integrity. The temporary launcher and receiver was then utilised to pig a variety of Bi-Di and foam pigs to dewater and dry the pipeline.

At this stage, two split-tee fittings were welded onto the existing jet fuel line, one at either side of the gas corridor, these would provide access points to hot tap and deploy the BISEPs into the pipeline, these fittings were to remain on the pipeline once the pipeline has been re-routed. To allow production to continue throughout the tie-in and re-routing activities, two mechanically installed clamps were installed inboard of the welded split-tees. These provided two further access points for BISEPs to be deployed into the jet fuel line, mechanical fittings were used at this location as they would be recovered after the workscope which avoided using sacrificial welded fittings.

With four hot tap fittings installed onto the jet fuel line, slab valves were attached to the fittings and pressure tests were conducted. The hot tap machine was then attached to each fitting in turn. After each successful hot tap operation and recovery of the pipe coupon, STATS deployed a swarf removal tool which was engineered to collect the metal debris created during the hot tapping operations. The swarf recovery tools recovered over 90% of the hot tap cuttings so preventing contamination of the jet fuel. A temporary stoppage to production was taken while each hot tap was conducted to prevent the swarf from travelling through the pipeline prior to the deployment of the swarf recovery tool. With access points created for two BISEPs on either side of the gas corridor the four BISEPs were attached to the fittings and an 8” bypass was installed between the BISEP on each side of the gas corridor.

STATS commitment to continued research and development has advanced the patented BISEP technology in response to increasing demand from clients. To reduce the number of hot taps and fittings required, the BISEP now incorporates a bypass facility through the BISEP housing providing isolation and bypass capabilities through a single hot tap fitting.

This advancement allows the BISEPs to be deployed into the pipeline and set, isolating a short section of pipeline on each side of the corridor and allowing production to continue flowing through the bypass between the BISEPs. The pipe section between the BISEPs was then drained through a 2” hot tap and purged allowing the pipe to be cut and removed. With full bore access to the jet fuel line created, long radius bends were welded behind the outboard BISEPs and tied into the empty pipeline. The newly re-routed pipeline was then Nitrogen purged and filled with jet fuel. A flanged port on the BISEP housing was tied into a 2” offtake on the newly installed pipe section allowing fuel to flow into the pipeline.

The outboard BISEPs were then unset and recovered into the launcher and the slab valves closed allowing the jet fuel to flow through the newly re-routed pipeline. The temporary launcher with a pre-installed Bi-Di pig, and temporary receivers were then attached to the pipe behind the inboard BISEPs.

The BISEPs were then unset and recovered and the Bi-Di was pigged with Nitrogen through the defective pipe section displacing the remaining jet fuel from the pipeline to the receiver. A 2” port on the receiver was tied into the newly re-routed pipeline which allowed the trapped jet fuel to be recovered, minimising the loss of fuel and avoiding the requirement to dispose of any fuel. Additional pig runs were completed on the defective section of pipeline to ensure it was clean prior to abandoning and capping the line. 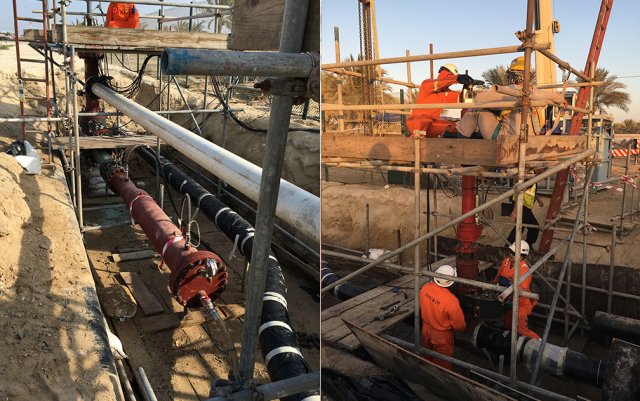 (Left) Temporary launcher attached to existing pipeline to allow recover of jet fuel, re-routed pipeline in place. (Right) Completion plug installation of welded fitting which will remain on the pipeline.

The BISEPs and bypass pipework were then removed from the pipeline and the hot tap machine was used to install 10” completion plugs into the flanges of the two welded fittings which remained on the re-routed pipeline.

This complex project was successfully completed with minimal disruption to production and safely executed ahead of the planned schedule. Prior to deployment of equipment to the worksite, STATS conducted a client witnessed Factory Acceptance Test at their operational base in Musaffah, Abu Dhabi.

Angus Bowie, Regional Director MENA for STATS Group, said: “The advancements made to the BISEP technology allows production to be maintained through a single hot tap fitting while still maintaining double block and bleed isolation.