STATS were approached by AMEC to propose an isolation solution to allow maintenance and replacement works on three maintenance valves and one ESD valve on a 20” gas import line onboard the North Everest platform.

After a detailed site survey and piggability study, STATS proposed the use of a tethered Tecno Plug pushed by stem bar to location from a temporary launcher as the best solution. As the pipeline had no pigging history, this method was considered as the least risk laden option rather than pigging a remotely operated plug from the pig trap. This alternative method was proposed based on detailed analysis during the Front End Engineering process including the piggability study which revealed potential issues for the route of the pigging run. These issues could have prevented the Tecno Plug from reaching the desired set location.

The detailed Front End Engineering process includes generation of a project design premise, pipestress analysis, piggability study, FMECA, operational procedure and risk assessment. This package produced by STATS identifies and mitigates operational risk and reassures clients by providing detailed analysis of the internal conditions and geometry of the pipeline prior to carrying out the isolation, guaranteeing the optimum solution is always delivered.

Prior to carrying out the isolation the pipeline pressure was reduced to 6 barg. With the ESD closed and sealant injected, the maintenance valve was then closed to provide a temporary pipeline isolation, this allowed the temporary launcher to be installed inboard of the ESD valve and a team of STATS technicians to break out the piping. A weld repair scope was also required and the STATS team removed the first 90o bend with clamshell cutting tools. 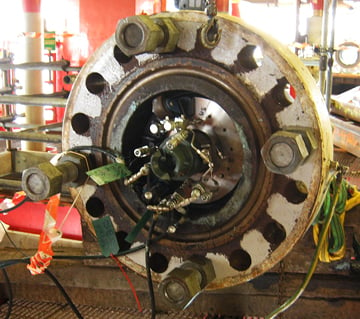 STATS also provided gas bags to act as a vapour barrier while a new 1500# flange was welded into the line. The new flange was then pressure tested using a STATS Flanged Weld Test Tool before reinstating the new bend and launcher valves.

With the temporary launcher now in place and fully pressure tested the valves were opened and the Tecno Plug was deployed into position outboard of the valves and hydraulically set to provide pipeline isolation. Once set and monitored the stem bar was disconnected and the valves were replaced. As the pipeline pressure was only 6 barg, the Tecno Plug was installed in the reverse direction, this provided full isolation while also providing a test boundary to pressure test the integrity of the reinstalled valves. A full pressure test at 208 Barg was then conducted between the temporary launcher and the Tecno Plug before the plug was unset and recovered back into the launcher.

The valves were then closed and temporary launcher removed allowing the pipeline to be reinstalled and returned to operation.