As part of the North West Hutton decommissioning programme, STATS Group were contracted to supply a high pressure pipeline isolation plug to provide a double block and bleed isolation barrier for the safe breaking of containment of a 20” oil export pipeline. This would allow the pipeline to be disconnected at the base of the riser by divers, and blinded off.

The North West Hutton field situated 130km north east of the Shetland Islands in the North Sea, officially ceased production on the 1st of January 2003. Prior to cessation of production a range of studies confirmed that there were no further commercial opportunities for the platform and it entered into a phase of decommissioning. The North West Hutton installation comprised a large steel jacket platform, wells and pipelines that were installed to produce hydrocarbons from the North West Hutton reservoir, discovered in 1975, in a water depth of 143 meters.

As the pipeline was tied into the live export system via a valve on a bypass line it was vital that the 20” export line was successfully isolated prior to diver intervention. Previously the bypass valve had been cemented closed, however as the integrity could not be confirmed, a proven isolation was required to ensure compliance with subsea isolation guidelines. This isolation would prevent any potential release of hydrocarbons to the environment and provide safe diver conditions. In addition, once the pipeline had been disconnected and capped on the seabed the remnant riser was required to be filled with inhibited water to prolong pipeline integrity.

In order to provide double block and bleed isolation against possible inventory and pressure from the Sullom Voe export pipework. STATS proposed the use of their Tecno Plug™ piggable isolation tool, deployed from the Cormorant Alpha platform into the riser and set below the tee connection.

The Tecno Plug™ was required to be pigged through the pipeline from the horizontal receiver, passed two valves and around three 90 degree and two 45 degree bends before reaching the set location. To withstand a possible pressure threat acting via the Brent System the Tecno Plug™ would be deployed backwards.

Tecno Plugs™ provide two separately verified, fully proven leak-tight barriers with a zero-energy zone between them. Following a detailed engineering study and assessment of the pipework STATS were required to design a custom Tecno Plug™ train comprising of four modules, one lock module, a dual seal module and a pigging module at the front and rear. This arrangement allowed each module to be short enough to ensure the Tecno Plug™ would successfully negotiate the 45 degree bends as it was pigged through the pipeline.

As the use of a remotely operated Tecno Plug™ would be challenging due to the difficulty in positioning an external communication system at the set location as it was below the Gas Tight Floor in the platform leg, the decision was taken to use a tethered system. The tethered system requires hydraulic communication lines to remain attached to the rear of the Tecno Plug™ via an umbilical while it is pigged under pipeline pressure to the isolation location. A specially modified receiver door was used to allow the umbilical to be fed from the platform and though the pipeline, the umbilical was also used as a secondary confirmation of distance the Tecno Plug™ travelled and verifying its position once at the set location. In total, the Tecno Plug™ traversed 160 metres before reaching the isolation location in the riser with the pipeline pressure vented from the North West Hutton platform.

With the Tecno Plug™ at location it was then hydraulically set via the umbilical to activate the setting sequence of the lock and seal module. Independent testing of each seal was then carried out to confirm leak-tight isolation and the pipeline was bled down to ambient from the North West Hutton platform to the rear of the Tecno Plug™. The annulus void between the Tecno Plug™ seals was vented to ambient to create a zero-energy zone. After a twelve hour isolation stability hold period, the ‘Isolation Certificate was issued and the Tecno Plug™ was confirmed as providing double block isolation allowing the flange to be unbolted and the pipeline disconnected.

The terminated flange joint at the bottom on the Cormorant Alpha riser was then capped with a custom engineered Flanged Test unit supplied by STATS, this was installed and bolted in place by divers. The single seal flanged unit was hydraulically set and a through-port allowed a leak test of the flange to be carried out to confirm its integrity. 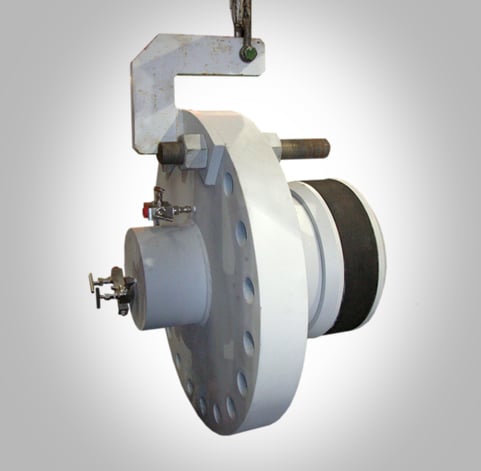 Once the North West Hutton platform was disconnected from the interconnecting pipeline system the topsides platform and steel jacket were recovered onshore leaving only the jacket footings, drill cuttings pile, and the import pipeline in place. The 20” export pipeline was then trenched and buried, removing its ancillary and protective equipment in the process.