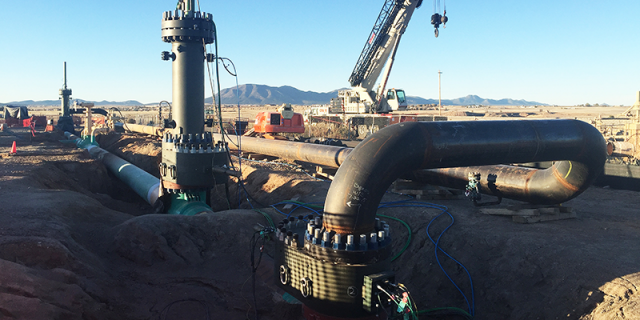 STATS Group were contracted by Kinder Morgan to provide a hot tap and plugging operation on a high pressure 30” Carbon Dioxide pipeline operating at 148 bar / 2,140 psi. This successful operation was the World’s first leak-tight double block and bleed isolation of a high pressure CO2 pipeline system.

The purpose of this project, which took place as part of a larger initiative to convert a non-piggable pipeline into a piggable pipeline, was to install full bore inline valves and retrofit pigging launchers and receivers into the pipeline system. The installation of a 24” bypass pipeline around the isolated section allowed continuous production and avoided system downtime during maintenance activities.

This intervention operation took place on a 500 mile 30” CO2 pipeline that operates from source fields in southwestern Colorado to Denver City, delivering product primarily used for enhanced oil recovery. The pipeline is currently undergoing significant upgrades to facilitate a transition to a piggable pipeline for ease of ongoing inspection and maintenance.

While the pipeline operated under normal conditions, the site contractor excavated the pipeline and welded on split tee fittings, based on qualified and approved in-service welding procedures. Two 30” fittings provided access for the BISEPs enabling mid-line isolation and two additional 24” fittings allowed production to continue around the isolated section through a bypass line. 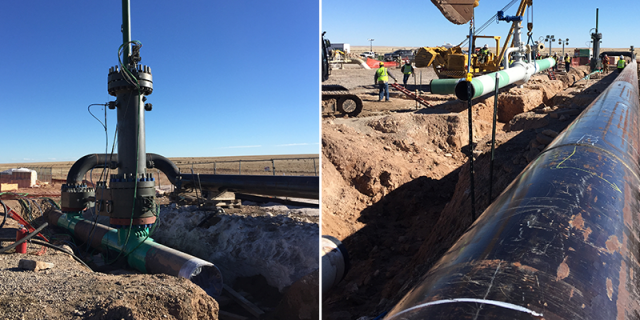 High pressure slab valves, supplied by STATS were installed on each fitting and STATS technicians subsequently leak-tested and hot tapped the pipeline at each location, successfully breaking containment and retrieving the pipeline coupons. The 24” bypass line was then installed, purged and leak-tested allowing the slab valves to be opened and flow to pass into the bypass line. The BISEPs were then installed onto the 30” fittings and the upstream BISEP was deployed into the flowing pipeline. The BISEP is housed in a pressure competent launcher and installed through the slab valve and rotated towards the flow of pressure to be isolated. Once deployed the BISEP is hydraulically activated compressing the seals. The resultant radial expansion compresses the seals against the pipe wall. Further application of hydraulic pressure generates a rubber pressure in the seals which allows the cavity between the primary and secondary seals to be pressure tested. This cavity is referred to as the seal annulus. Line pressure acting against the BISEP pressure head maintains seal pressure creating a fail-safe feature providing seal actuation independent of the hydraulic system. The downstream BISEP was then deployed and set in the pipeline creating a mid-line isolation and diverting the flow though the 24” bypass line. The section of pipeline between the BISEPs was then vented in a controlled manner to a safe location allowing the BISEP™ seals to be tested and verified.

Both primary and secondary seals were pressure tested with full pipeline pressure in the correct direction and the annulus between the seals was vented to ambient. After the secondary and primary seal tests are complete the isolation certificate is issued. The BISEP annulus provides a zero-energy zone between the seals which is monitored for the duration of the isolation.

Hot tapping and isolating liquid and gas pipelines has a long and successful track record globally, however this is the first time the isolation of high pressure CO2 pipelines has been attempted due to many challenges. At such high pressures and ambient temperatures, the CO2 exists in the pipeline in the supercritical fluid state, however when vented to atmospheric pressure it will flash to the vapour state, accompanied with a sharp reduction in temperature which can also result in the formation of solid CO2 if the process is not carefully controlled.

The formation of solid CO2 in the BISEP, in addition to the ductility issues associated with its low temperature (<-57°C), would be a problem due to the possibility of interrupting the integrated pressure communication connections used to monitor the seal annulus and performance of the BISEP.

The problems associated with venting liquid CO2 to atmospheric pressure apply equally to any unintended leaks of CO2 – for example a small leak of liquid CO2 across the primary seal would cause temperature reduction which could further affect the integrity of the elastomeric seal and the steel components which support it. These problems were dealt with by management of CO2 pressure. The blow down speed of the isolated section of pipe could be controlled such that the temperature remained above design limits of the seal and the steel selection.

Nitrogen was employed to purge CO2 out of the seal annulus allowing pressure drops to happen without low temperatures in the proximity of the seals. The annulus could be maintained at a pressure that was safe from a total contained energy point of view while remaining just high enough to prevent the formation of solid phase CO2 (dry ice).

With the maintenance work successfully completed and the isolation no longer required, pressure was equalised between the BISEPs and the tools were hydraulically unset and recovered into the launchers and the slab valves closed. The bypass line was removed and completion plugs were installed into the flanges of the 24” and 30” fittings to isolate the hot tapped branches and allow the slab valves to be removed from the fittings and blind flanges attached. 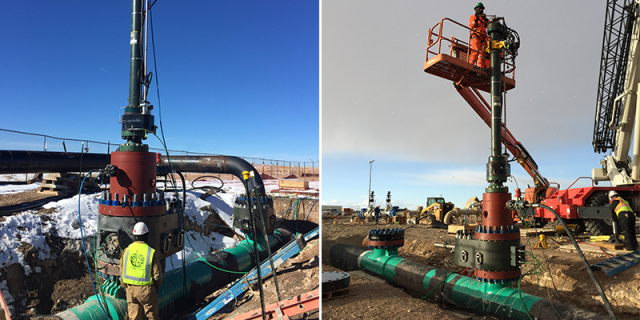 To date, STATS have carried out isolations at four sites along the CO2 pipeline operating at around 138 bar / 2,000 psi and have completed in excess of 160 days of individual BISEP isolation, whilst avoiding system downtime during critical maintenance activities. Throughout the isolations there has been no degradation of the seals or leaks past the primary barrier, allowing the critical launcher and receiver upgrades to occur safely and without any uncontrolled release of pipeline product. Careful control of CO2 phase-change during venting, coupled with pre-deployment testing, verification trials and the appropriate selection of steel and elastomer materials to accommodate CO2 service, were key reasons for project success.