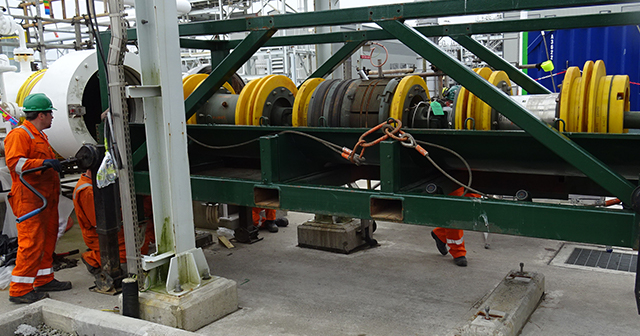 STATS Group were contracted by Px Limited to carry out a double block isolation of the Shetland Island Regional Gas Export (SIRGE) pipeline approximately 500 metres outside the Shetland Gas Plant (SGP). The successful isolation of the 30” pipeline provided safe worksite conditions to allow a short section of line to be removed and a 30” x 10” branched tee to be welded into the live pipeline.

The new tee section provides a future tie-in point to transport existing gas from East of Shetland Pipeline (EoSPS) at Sullom Voe Terminal (SVT) to be rerouted through the SIRGE pipeline and onto the Frigg UK Association (FUKA) pipeline for onward gas conditioning treatment at the St Fergus Gas Terminal. The new 30” x 10” tee also provides a spare future tie-in point for transport of any additional West of Shetland (WOS) gas.

In order to fully assess the pipeline isolation project, an engineering and feasibility study was conducted to determine the safest and most efficient method of carrying out the isolation. Following the study, STATS proposed the use of a Remote Tecno Plug®, a piggable isolation tool which provides fail-safe double block isolation of pressurised pipelines while the system remains live and at operating pressure.

In advance of the workscope, considerable preparatory works were conducted by STATS, including a site survey to gather critical information on the pipeline, the work areas and tie-in location, to ensure no issues would compromise the success of the project. This included background noise surveys at the pig launcher, tie-in worksite and plug isolation location. This ensured there would be no interference with the Remote Tecno Plug communication system during the pre-deployment checks, pigging activities or isolation plug monitoring operations. Key to the project was a piggability study completed by STATS which analysed all the pipeline features from the pig launcher to the isolation location to ensure the pigging route was acceptable for the Remote Tecno Plug to safely traverse in both directions without issue.

STATS sub-contracted nitrogen pumping services to a third party to pig the Remote Tecno Plug 850 metres to the isolation location and provide venting, purging and vacuum/venturi activities throughout the project. Following the pigging operations and to ensure safe worksite conditions for breaking of containment activities, the pipeline was required to be vented and purged. STATS supplied a patented 30” x 2” lightweight strap clamp, to provide an access point for a 2” hole to be cut into the SIRGE pipeline. Once the hot tapping operation was complete a 2” ball valve mounted to the strap clamp was closed. A dual venturi system was then used to draw down the residual Nitrogen and production gas remaining in the pipeline. Once the required vacuum of 100millibar was reached, the venturi system was shut down and isolated before atmospheric air was re-introduced into the pipeline through opening the 2” ball valve. Once the pipeline section was equalised to ambient atmospheric pressure, the oxygen levels were checked and confirmed as being acceptable for the safe breaking of containment operations to commence.

Due to the criticality of the SIRGE pipeline and the challenge to complete the work within a tight shutdown window and maintain gas supply to the St Fergus Terminal, Px requested that a spare Remote Tecno Plug was mobilised to site along with a contingency intervention and isolation methodology. The contingency intervention would involve the deployment of STATS patented BISEP® tool, installed through a 30” x 30” mechanical hot tap clamp and dual seal slab valve to isolate the pipeline inventory.

The 30” mechanical clamp was designed to class 1500 and weighed 20 tons. To ensure it could interface with all the STATS supplied contingency equipment, including the hot tap machine and BISEP tool, the clamp featured a class 900 flange pattern. Additionally, STATS scope of supply was the design and manufacture of a 30” dual seal completion plug and custom blind flange, should there be the requirement to install the 30” x 30” mechanical clamp assembly.

STATS conducted a full Factory Acceptance Test (FAT) programme on both Remote Tecno Plugs and all the contingency equipment at their headquarters in Kintore, Aberdeenshire. All equipment was tested in separate, purpose-built test-fixtures representing the pipeline features and constraints. The FATs were witnessed by client representatives and their selected independent verification bodies to ensure the equipment met the project requirements. The FAT included pigging and isolation of the Remote Tecno Plugs as well as the installation, hot tapping, isolation and recovery of the contingency equipment. As the 30” SIRGE pipeline is routed underground from the pig launcher to the isolation location through various depths of peat, it was important to confirm that tracking and communication with the Remote Tecno Plug during pigging operations would be accurate and uninterrupted. As such, further trials were conducted at STATS facility to successfully demonstrate the ability to track, monitor and communicate with the Remote Tecno Plug through 4 metres of peat.

Upon successful completion of all FAT operations and procedures, the equipment was mobilised to Shetland ready for the shutdown operations to commence. Once the Remote Tecno Plug arrived at the gas plant and completed its pre-deployment checks, the isolation tool was loaded into the pig launcher. Following the loading operation, post leak testing and confirmation from Px and the operator that they were ready for the Remote Tecno Plug to be launched, the isolation tool was successfully pigged with Nitrogen through the pressurised pipeline and tracked to its isolation location.

Once at location, the Remote Tecno Plug was hydraulically activated to engage the locks and dual seals. As part of the isolation barrier proving sequence, each seal was tested independently with full pipeline pressure in the direction of the expected pressure differential, proving both seals of the double block isolation were leak-tight. The Nitrogen inventory in the pipeline section was then vented off via vents located on the pig launcher. The annulus between the Remote Tecno Plug seals was then vented to ambient to create a zero-energy zone. This was then subject to a 24 hour isolation stability hold period before the ‘Isolation Certificate’ was issued.

With the isolation in place and the double block isolation verified, STATS technicians installed the 30” x 2” lightweight strap clamp and conducted a 2” hot tap, allowing the venturi draw down of the pipeline behind the isolation plug. Once successfully completed, the lightweight clamp and hot tap machine were removed from the pipeline and a clamshell cutter was used to break containment and remove a 4 metre section of pipeline. The branched tee with two double block and bleed isolation valves was then positioned and welded into place, providing a future tie-in point.

Throughout the construction workscope activities the Remote Tecno Plug was constantly monitored and remained stable for the full 12 day isolation period. With the tee successfully welded into position, all welds were subject to rigorous inspection. Upon acceptance of the weld radiograph results, preparations were implemented in order to unset the isolation tool and recover back to the pig launcher. The pipeline pressure was equalised allowing the Remote Tecno Plug to be hydraulically unset and pigged back to the launcher by controlled Nitrogen venting operations. On successful recovery the isolation plug was removed from the launcher and all project equipment was stripped down and demobilised from the Shetland Gas Plant. 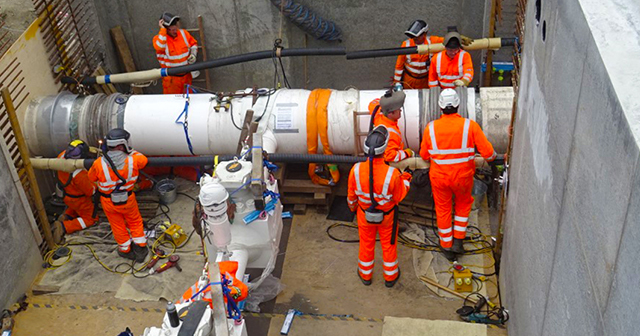 Gary McDowall, Projects Manager for STATS Group, said: “The isolation scope was successfully completed as planned and ahead of schedule, allowing the safe retrofitting of the branched tee, with no contingency equipment required. The successful delivery of the project is testament to the teamwork and good communication between all parties.”

Liam McKinney, Pipeline Engineer for Px and responsible for the pipeline isolation scope, stated: “The success of this project is down to the significant time and effort put in by all parties to ensure the operations on-site went as planned and as demonstrated during the intensive FAT programmes. With STATS and the pigging contractor working closely with each other over the course of the FAT operations, this paid dividends during the site works as many of the personnel were involved in both activities. Not only were all work activities, be it at STATS facility or on-site at SGP completed in a diligent and efficient manner, they were always completed safely.”