STATS Group were contracted by Apache North Sea Ltd to safely isolate the Forties Pipeline System (FPS) so that subsea isolation valves (SSIV) and piping spools could be safely installed and leak tested, avoiding the need to depressurise the entire pipeline system. The 36” main crude oil line is a pre-eminent pipeline network in the North Sea carrying 40% of the UK’s oil, with over 50 offshore assets flowing into the 169km FPS, which runs from Forties Charlie platform to Cruden Bay terminal, transporting approximately 700,000 barrels of oil per day.

A detailed engineering and piggability assessment confirmed the fitness-for-purpose of the Tecno Plug and identified a suitable set-location for the isolation plugs. An expert isolation committee from a subsea engineering and construction company assessed the suitability of the high pressure remote isolation plug as a double block barrier for diver breaking containment activities.

The Tecno Plugs were deployed and pigged in a train with two bi-directional batching pigs positioned ahead of the plugs. The complete plug train was pigged to the set-location using inhibited seawater to ensure the section of pipeline being removed was fully de-oiled, prior to breaking of containment preventing any oil release into the environment. With the Tecno Plug accurately positioned, it was hydraulically set to activate the locks and dual seals. Precise positioning and accurate tracking was provided by means of an assured subsea extremely low frequency (ELF) control system, additionally this system provides continuous monitoring throughout the isolation. The second Tecno Plug was at location but was not hydraulically set until the construction scope was completed.

Independent testing of each seal with full pipeline pressure confirmed leak-tight isolation and the pipeline was bled down to subsea ambient from the platform launcher to the rear of the Tecno Plug. The annulus between the Tecno Plug seals was vented to ambient to create a zero-energy zone.

After an eight hour isolation stability hold period, an ‘Isolation Certificate’ was signed and the Tecno Plug was confirmed as providing double block isolation of the Forties Pipeline, allowing the subsea construction phase to commence. Two pipeline spool pieces were safely removed to allow the installation of the two metrology spools required to tie-in the pre-installed SSIV arrangement to the pipeline and the Forties Charlie platform.

With subsea construction completed, the newly made-up flange joints were locally leak-tested at each gasket to provide initial confirmation of the joint integrity. This allowed the pipeline pressure to be equalised behind the isolating Tecno Plug and the seals and locks were actively unset.

The rear Tecno Plug was remotely operated to hydraulically set the seals and locks; once the barrier was proven, a successful re-instatement leak test of the newly installed SSIV was then conducted by raising the pipeline pressure from the platform launcher to 158 bar against the leak test Tecno Plug.

The leak test Tecno Plug was then unset and the pipeline pressure equalised, allowing the plug train to be pigged through the newly installed SSIV back to the launcher on the Forties Charlie platform for recovery. 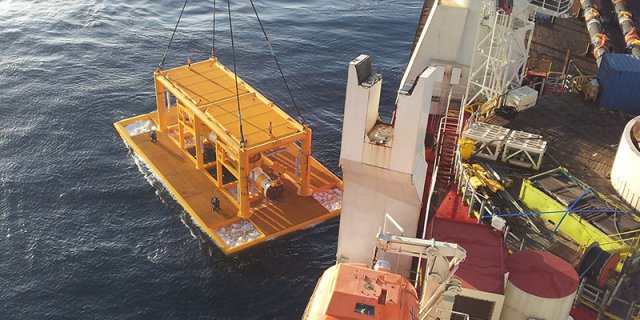 Pete Duguid, Chief Executive Officer of STATS Group, said: “We were proud to have been selected to undertake this highly critical and high consequence project by Apache North Sea. The key to the success of this project was the team effort across all parties involved, which delivered a well-engineered solution which was completed incident-free and three days ahead of schedule.”

Mark Richardson, Apache North Sea Limited Projects Group Manager, said “STATS Group provided a safe and expedient execution of the pipeline isolation, which formed a major part of the SSIV Project. The isolation of the FPS Pipeline was a complex project, but the hard work and great team effort by all parties involved resulted in a successful outcome. The enthusiastic and dedicated attitude of STATS developed a great working relationship, resulting in a safe and successful outcome.”