STATS Group has successfully completed an isolation project on TAQA’s Brent pipeline at Sullom Voe Terminal in the Shetland Islands. BP required to undertake a valve refurbishment operation on the 36” Brent Pipeline Pig Receiver while the pipeline remained in normal operation.

STATS were approached to provide a double block isolation to facilitate the valve works and proposed the use of a 36” Tecno Plug, controlled using composite umbilical hydraulic lines to allow the valve change out to be carried out safely. The compact design of the single module Tecno Plug allowed the plug to be set in the short section of pipework upstream of the production tee enabling export from the Brent pipeline to continue. 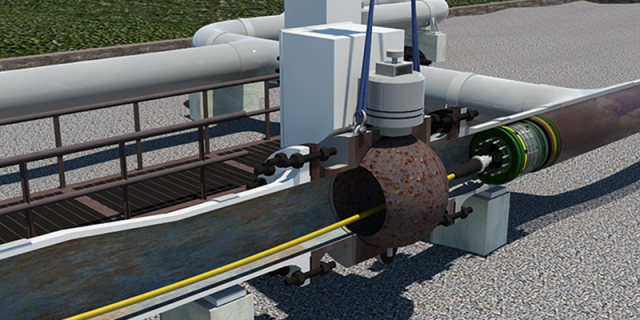 To allow deployment of a tethered Tecno Plug a temporary receiver door was used with a Stuffing Box arrangement allowing the umbilical to pass through the system while at pressure. Once a leak test was performed on the receiver, temporary door and stuffing box, the isolation plug was pigged with water to the set location. Accurate plug location was determined by umbilical markings with additional positional verification confirmed by an ultrasonic signaller from outside of the pipe.

The Tecno Plug was set at location using a hydraulic system via the umbilical and an annulus test was performed to verify the integrity of the primary and secondary seals. Both seals were independently tested with full pipeline pressure and monitored for 12 hours and once the verification period was completed, the isolation certificate was issued. The STATS field team consisted of four isolation technicians as part of the workscope to provide constant monitoring of the plug during the isolation.

36” Tethered Tecno Plug prior to deployment

With the receiver and valves depressurised and the Tecno Plug providing a verified isolation against the pipeline pressure, the receiver was rigged away, allowing the main umbilical to be disconnected and temporary control umbilicals were attached to ensure constant communication with the Tecno Plug, allowing the main umbilical to be removed through the valve. On completion of the valve maintenance, further umbilical management was carried out to allow the valve to be repositioned.

STATS Group CEO, Pete Duguid, said: “The project ran like clockwork with all parties working seamlessly together. STATS’ isolation services allowed valve maintenance activities to take place efficiently and prevented shutting down the entire pipeline. This would have resulted in a loss of time and revenue, potentially costing millions of pounds in lost production per day.”