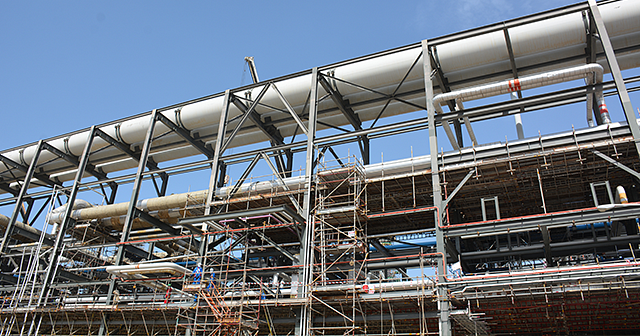 STATS were contracted to provide leak-tight pipeline isolation services on three pressurised steam lines as part of a larger restoration project at a major refinery in the Middle East. STATS had previously provided a double block and bleed isolation of a 3” pipeline as an emergency response for the client at the gas processing plant. The quick response isolation used STATS BISEP® technology to provide leak-tight isolation of a live gas line, without shutting down the refinery.

Unlike the first project, this scope presented many challenges that would push the limits of STATS current isolation technology and require further research and development to provide an engineered solution capable of isolating each of the high temperature steam lines.

The purpose of the restoration project was to rebuild sections of the refinery following a fire which caused damage and limited refinery production capacity. The steam lines to be isolated included a 30” x 30”, 24” x 6” and 36” x 10” with temperature ranging from 190°C to 381°C and pressures from 4 bar to 42 bar. As the pipework was not piggable the only viable option was to deploy the isolation plugs at location through a branched fitting (either by welded split tee or mechanical clamp). The clamps with equal sized branches allowed hot tapping to be conducted to provide access for STATS BISEP plugging tool to be deployed into the live steam lines. An additional challenge to the project was that the steam pipework was situated 20 metres off the ground which required scaffolding to be erected at each location, however space was limited due to surrounding pipework which added further difficulties. A detailed risk assessment was conducted for each of the steam lines and isolation locations. Working at height with safety harnesses, the technicians also had to wear suitable protection from the intense heat radiating from the exposed pipelines and worked reduced shifts, while incorporating regular breaks and crew changes during all activities.

STATS patented BISEP features dual elastomer seals that are hydraulically activated to create a monitored leak-tight seal. The temperature range for the standard HNBR (Hydrogenated Nitrile Butadiene Rubber) seals is a maximum of 150°C and would be unsuitable for the extreme temperatures of 381°C. To overcome this issue STATS explored alternative materials, both elastomers and graphite options, to formally qualify different materials for the high temperature application.

To test and qualify the seal material, STATS constructed a 10” test fixture at their operational facility in Abu Dhabi. Heat blankets were attached to a small canned-end fixture to replicate the extreme temperate and allowed STATS to deploy various prototypes with graphite and rubber seals. After extensive testing STATS proved that a graphite seal and a high temperature specialist rubber compound would both be capable of providing a leak-tight seal at 381°C and with a pressure of 42 bar.

The specialist rubber seal was selected for the project due to its performance during testing. Prior to the live deployment STATS conducted final tests at the refinery using a 10” steam loop. This provided final confirmation that the rubber compound would perform as required at the temperature, pressure and flow conditions of the live pipelines.

STATS isolation methodology for the high temperature steam lines was to use the u-bends in the system as the location for the isolation. This allowed STATS to deploy a modified BISEP with a single high temperature seal into the steam line and create a heat barrier. Once the BISEP isolation was in place the flow of steam was arrested, resulting in cooling to take place behind the isolation barrier, this then generated condensate and slowly filled the u-bend with water and reduced the temperature. Once water-filled, a standard HNBR dual seal BISEP was deployed into the line behind the heat barrier. The seals on the BISEP were each independently tested and the annulus void between the seals was vented to create a leak-tight double block and bleed isolation. With the fully tested and constantly monitored BISEP isolating the steam line an isolation certificate was issued to the client allowing breaking of containment activities to safely take place.

The client had requested that the split tee fittings were removed from the pipeline after the workscope was completed, so STATS methodology involved utilising our Tecno Plug® inline isolation tool to enable the BISEPs to be recovered from the line, enabling the fittings to be cut and removed from the pipeline. With the BISEP isolating the pipework, a pressure-competent temporary launcher was installed to the bare end of cut pipe with a pre-installed Tecno Plug inside.

As the Tecno Plug was being deployed into condensate it incorporated HNBR high temperature dual hydraulic seals. However, as an additional risk mitigation, a heat block module was manufactured and incorporated onto the Tecno Plug, to allow for any unexpected temperature increase. Although a heat block module was included as contingency, the temperature of the condensate was monitored and controlled throughout the live workscope.

With the BISEP set in position and providing a fully monitored isolation barrier, the Tecno Plug was required to be installed into the pipeline and positioned and set upstream of the BISEP, to become the primary isolation barrier. To enable this a temporary launcher was mechanically activated against the pipe end engaging the locks and graphite seals against the outside of the pipe. A leak-test of the launcher was conducted against the rear of the set BISEP to prove the integrity of the temporary launcher prior to unsetting and recovering the BISEP. After the BISEP had been retracted out of the pipe, the Tecno Plug was deployed using mechanical stem bars beyond the BISEP location to become the primary isolation barrier. Once at location the Tecno Plug was hydraulically activated to energise the locks and dual seals and the annulus between the seals was vented to ambient to create a zero-energy zone. Each seal was then independently tested, proving both seals of the double block isolation were leak-tight. This allowed the temporary launcher and BISEP to be vented behind the rear of the Tecno Plug allowing them to be safely removed from the line.

The pipework was then cut to remove the fitting and hot tap penetration leaving a bevelled pipe end where a flange was welded onto the line. Throughout the isolation the BISEP and Tecno Plug isolations were constantly monitored to ensure leak-tight double block and bleed isolation was maintained. With the fitting removed and a flange welded onto the pipeline, a full-bore valve was installed along with the temporary launcher. This allowed the Tecno Plug to be reattached to the stem bar, hydraulically unset and recovered into the launcher. The valve was then closed providing a barrier to depressurise and vent the launcher and remove it from the system. The newly installed pipeline was then tied into the new valve, allowing the line to return to operation without leaving any fittings on the line, and preventing any potential leak paths or future integrity issues.

This complex restoration project featured many technical challenges, however STATS extensive track record of providing hot tapping and isolation services and an ability to engineer solutions to meet clients’ needs allowed the client to carry out essential restoration safely and efficiently.

During the refinery restoration project and in conjunction with the steam line isolation scopes, STATS also conducted an additional 48 individual hot taps and BISEP deployments and 24 Tecno Plug isolations on hydrocarbon pipelines at the refinery. The isolations ranged in size from 2” to the largest at 54”. The design, manufacture and onsite activities were completed in only nine months. To the best of the company’s knowledge this is the world’s first, temporary double block and bleed isolation of large diameter live steam pipelines via hot tapping and plugging technology.