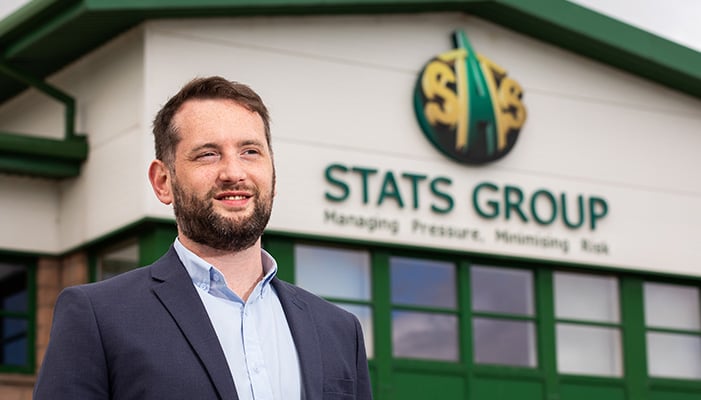 STATS Group has strengthened its management board with the appointment of Ross Wallace as director.

Ross joined the STATS in 2011 and has worked in several finance roles, including Group Financial Controller ahead of his promotion to Finance Director.

He was instrumental in helping establish STATS as a major pipeline solutions provider in North America during a seven year spell based in Edmonton and Houston before returning to a senior role at STATS Kintore headquarters.

Leigh Howarth, STATS Group Chief Executive Officer, said: “In his 11 years at STATS, Ross has grown with the business, developing his professional and commercial capabilities, and is an excellent example of the career opportunities we’ve been able to provide as the business has progressed.

“He has excelled in a variety of roles in both the UK and North America, has a tremendous understanding and knowledge of our business, and I know he’ll make a significant contribution to our board as we continue to grow the business.”

A graduate of The Robert Gordon University and locally schooled at Turriff Academy, Ross added: “The reason I joined STATS was because I was hugely impressed by the enthusiasm of the directors and their vision for where they wanted to take the business and it remains a hugely ambitious company.

“The company has supported me throughout my career, including when I wanted to work internationally, and I was delighted to play a part in helping the business establish a footprint in North America, which has emerged as one of our most successful regional operations.

“STATS focus on innovation and in pushing technological boundaries is a differentiator and I am looking forward to working with my fellow directors in supporting further growth across the world’s major energy hubs.”

If you have a question or would like more information, we are here to help you!
Find out more